2022 Winter Skeet League is underway, shooting on Sundays (8am-2pm) and Tuesday evenings (5pm-10pm).  Even if you're not shooting league, it's OK to come out a shoot.  Just sign up on a sheet in the clubhouse and let them know you're just practicing. 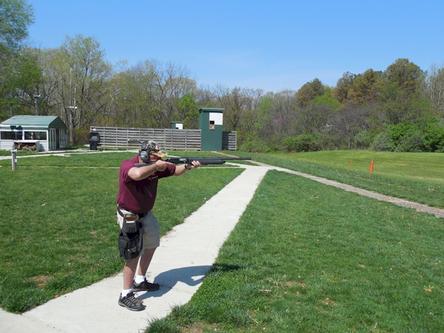 a round consists of 25 clay pigeons (birds).  There are 8 stations

that shots are fired from in various combinations of singles and

doubles, from a High house and Low house.  The stations are

on to and more experienced shooters are more than happy to

help out.  Just remember, aim where the clay bird is going to

be, not where it’s at, when you pull the trigger, and keep swinging!

An interesting fact, skeet was used by the military to train aerial gunners to hit moving targets (enemy planes). Fees are

The annual Winter Skeet League is held starting in January, and continues for several months depending on the number of 5 person teams.  The League is the Club’s largest ongoing event for many years now.  50 birds are shot per team member per week, and scores are handicapped to even the playing field for all teams.  League is shot on Sundays from 8am to 2pm, and Tuesday evenings from 6pm to 10pm.  An End of League party is held to award trophies for the top teams and top ten individual shooters, and the coveted “Top Gun” award for the individual shooter with the highest average for the league.

The skeet fields are open year around for practice using the token system, unless a conflicting activity or event is taking place.  Tokens are available in the Clubhouse vestibule, cost is $5 per 25 birds.

The front skeet field is also used for a shotgun game called 5-Stand as well.  Portable trap machines are added to the field, throwing birds at various angles and elevations, and in different combinations.  It makes for a challenging game, and not many perfect rounds (25 out of 25) have been shot.  The 5-Stand is used only when League is not being shot due to time and labor constraints of set up.